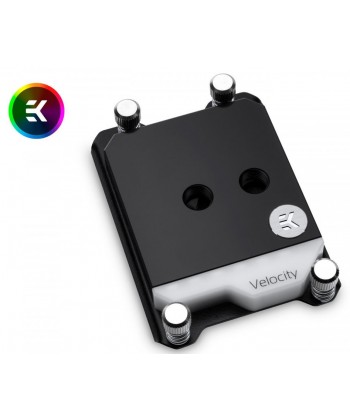 The top is made from CNC machined POM Acetal. Every EK-Velocity sTR4 water block comes with a precisely machined copper base (sometimes referred to as ‘cold plate’) which is made from purest copper available on the market and is treated with nickel electroplating.

EK-Velocity sTR4 comes with a pre-assembled error-preventing mounting mechanism that is installed directly onto the SocketTR4 mounting holes. The result is a perfect installation which results in optimal performance every time. This also means the water block is out of the box compatible with AMD’s server type Socket SP3 motherboards. With such a mounting solution, the user does not need to remove the motherboard from the case and so has a hassle-free installation procedure of the new CPU.

This product is compatible with popular RGB sync technologies from all major motherboard manufacturers. The arrow marking on the 3-pin LED connector is to be aligned with the +5V marking on the A-RGB(D_RGB) header. You can easily remove the LED strip cover which is mounted with two screws to replace the LED strip with some other type of LED strip.